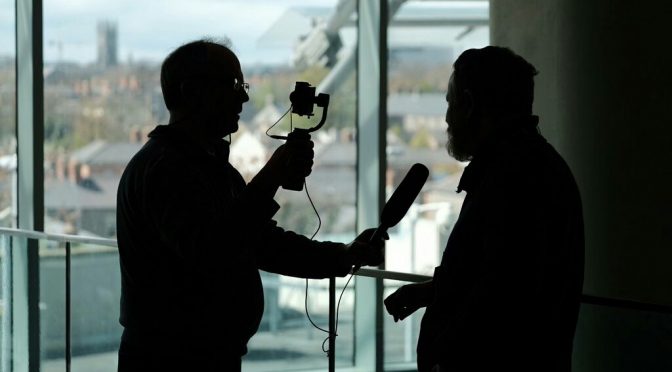 My colleague Florian Reichart runs an excellent knowledge base on all things related to mobile video. He asked me for his blog to write about the development of #mojo — the concept of mobile journalism with Smartphones. So here are the answers to his questions and why I developed the concept of #Oneshot reporting. You will be able to find more on his Blog: Smartfilming.

1. When did you discover a smartphone as a media production tool (for #Oneshot reporting)?

It was around 2011. I was filming a lot of news as a VJ since 1997 for the public broadcaster in Germany I had worked for long. But the whole publishing process was totally traditional, and ineffective. Not closely connected to the viewers, and it took a long time to publish. As my bosses didn’t understand the advantages of mojo and only wanted to do it the way we always did, I started on my own.

Changing the camera, I didn’t want to go on producing the traditional way either. As I thought, just changing the camera and PC for the smartphone but doing the same lengthy process of gathering footage and editing and voice over won’t do the trick. Therefore, I adapted the skills of a live reporter: do just one shot and film, show, interview, report, feel, expose, narrate everything just at once without editing. So I developed the #Oneshot reporting for local video news. Done in 3 minutes, published in 5 minutes. Unrivalled so far.

2.   What’s currently the biggest limitation? What new ability are you looking forward to?

The biggest limitation was for the #Oneshot reporting getting good sound for interviews, as well as the reporters’ narration while moving through the terrain of the scene. I therefore always used a classical shotgun microphone with a self soldered cable XLR (female) to 3,5 TRRS plug. With the new micro wireless solutions from Seramonic and Rode with two lavaliers, this gets even easier. But in future we will run into the problem, that Smartphones might get rid of all external ports: Even the USB-C.

I started changing the device: Instead of using the Smartphone, case, gimbal or frame with external light I’m now often using a dedicated camera. The DJI Pocket 2 is the tool for me. It delivers what I need all in one device. It brings along even a wireless mini-microphone receiver, a gimbal and native 50P fps. It’s consisting of the same elements and sensors like a smartphone, but all is built-in. Some hardcore #Mojos might say: that’s not mojo, because it not all produced only with the Smartphone: I don’t bother. If you need the Smartphone feeling, there is a dongle to connect the DJI to it and use it as the big screen or to transfer the footage.

So #MoJo will stay, but I doubt it will always need a Smartphone to produce it. There might be other handy tools for that. Even thought, the Smartphone will stay as a smart always-with-you camera in your pocket — where ever you are.