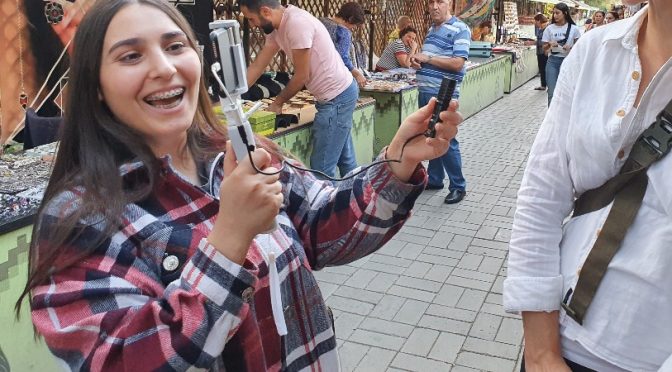 The Armenian journalist Gayane Mirzoyan reports about the video training she took part as the Co-trainer in Yerevan: 11 young female journalists in Armenia came for a 4-day course on mobile video journalism and how to produce it really fast: #Oneshot video reporting.

The #Oneshot reporting course was developed by the German TV + Radio journalist Kai Rüsberg. He has more than twenty years of experience working as a reporter and producer for nationwide ARD Network stations. For the last 10 years, he got into mobile journalism, as at a certain point realized that traditional television news format no longer correspond to the development of technology in the field of media.

According to Kai Rüsberg, new technologies dictate new rates of information transfer, and the #Oneshot technique is the best fit for the tempo of time.

“#Oneshot video means a film produced in one continuity with live reporting by the author, as he shows relevant scenes and zooms into details and back to show the full scene while lively reporting the facts and including interview partners. The method is surprisingly fast to produce and meets all professional requirements in terms of picture quality and journalistic standards. The industry and society can profit from quick and cheap but relevant news web videos”.

The workshop in Yerevan began with a practical assignment, which immediately captured the participants.

“Kai showed an individual approach to everyone, and the lesson was based on the transfer of practical knowledge, which is very important” said course participant Hrachuhi.

The course included both: basic techniques for shooting and editing high-quality video on a smartphone and the analysis of the technical characteristics of the capabilities of mobile phones, sound ranges, and frame format.

The journalism of one-shot was compared with the traditional journalism of five shots. These basics came in handy to fully understand the capabilities of video reporting.

Talk about journalistic ethics was the final part of the seminar. Advances in technology make almost everyone a reporter. Thus, the observance of ethical standards in journalism becomes even more urgent for our time.

The fact that the course was mostly based on practical assignments allowed even beginners to show their progress after 4 days of the seminar.

One of them is Anna, an architect, who also writes on urbanism issues. She admits this quick course on mobile journalism was the first step that help to get started reporting with smartphones.

“This course taught me how to plan, shoot, edit video stories. The workshop was very clear and detailed. We got the “how-to” actionable lessons, coupled with insights, based on years of experience” Anna said.

Another course participant Anya, who is a young reporter, working at an investigative media outlet in Armenia. She already uses new skills in her everyday job: “The course really gave me a lot, I am already doing the third material, which I filmed and edited myself by phone. Thank you for the effective course”.

Gayane Mirzoyan is a Founder of Urbanista and the head of the Journalists for the Urban Development NGO. Gayane has about 20 years of experience in media as a multimedia journalist, editor, media manager, media trainer, and researcher.