Audio is often an uncherished child of videomakers – so it is for #Mojo mobile journalists. Usually it is because most of their gear doesn’t have much option to manipulate or optimise the settings. But let’s talk openly – more often they don’t care much about. And although they tend to spend quite a lot of money for their newest iPhone or DSLR with big rigs, the microphones (if they spend money for that) seem to be rather “on the small side”.  They buy a cheap €50 Lavelier mic or a top-mounted Shot-Gun-type mic with a flash-shoe and aim from a distance at their object. To be honest  – that’s nonsense.

I made some visualisation of equipment performances. And there are some surprising results.In this post, I’m looking at two typical use cases I’m often confronted:

As I report on science and media topics, I often need the best experts in the German speaking world or sometime beyond. Usually some of them are too far away, even though I rather would like to see them personally and talk to them. This often gives a benefit compared to a remote interview. But if not possible I do a remote interview on the phone or sometimes by a video-stream. But I don’t want to record that poor stream quality, so I ask those interview partners to record the audio on their own smartphones and send the resulting file to me. Here I explained how to do (GERMAN):

The German sound engineer Hartmut Pfitzinger developed a unique piece of software that adapts the recording process to the hardware of the smartphone. It can change the quality sometimes quite fundamentally. What it does? It bends or better equalizes the frequency characteristics of the build-in microphone to a desired level and eliminates some other obstacles. And it does it all before recording. Most ordinary recorders or streaming solutions don’t change the signal before it is data-compressed. To change that material afterwords is much less efficient. The difference the software makes can be monitored in this audio take (Audio-Link leads to DRadio):

To get a grip on what is different: What you can hear in this take can be visualised by amplitudes (volume per frequency) on a time-frequency plane. The low frequencies seem to appear suddenly from nowhere, because of the different sound handling inside of the phone. Also the high range improved a little, which you can notice in the logarithmic amplitudes.
(you can load all graphics separately to read the scale; in Windows right click on the mouse)

I compared the recording of a telephone with the field recorder derivate (app is called DRadiointerview, just for internal use) which was adopted for interviews of reporters by the public Deutschlandradio:

What you can see is an increase of the important mid-range volumes above 1 kHz. This is especially important for intelligibility and naturalness of all human voices and for natural sounds. Also there are bass and treble, whereas there would be none if you’d just record a telephone interview. It may not look dramatic, but later on I’m showing it in a logarithmic scale, which is nearer to our perception impression.

Audio for Mojo in the field

So I wanted to know how the equipment of a typical Mojonalist, a journalist just equipped with a smartphone to make Video reports, is doing. My colleague Sandra Sperber made a test-recording back in last year with three types of microphones:

From my impression the findings in this video are quite amazing. I’m using it for some of my video and Mojo trainings, to show the effects of different recording setups. She uses 1 popular lavelier by Rode, 1 ordinary headset which comes with the iPhone and an iPhone 6 without any external mic. From my hearing impression, I found the headset to be the best, esp. after she removed the scarf. And you can notice that in the graphic:

What is interesting, is that the build-in microphone of the iPhone has the best frequency bandwidth of all of them. The higher mids are louder than the three others (could result from stronger background noises because of distance to the sound source). Even though you can’t hear that, because it is to far from the sound source and the sound is quite flat and it is noisy. To the low end of the frequency range, there is much background noise with the smartLav+. This bass yield could be an advantage, but in this case, it over-exaggerates the background noise. The iPhone obviously has a strong high-pass filter below 50 Hz.

In the following graphic, you can see these effects more clearly as I analysed the indoor recordings and put the amplitudes in a logarithmic scale. That gives a better impression of the loudness we perceive. 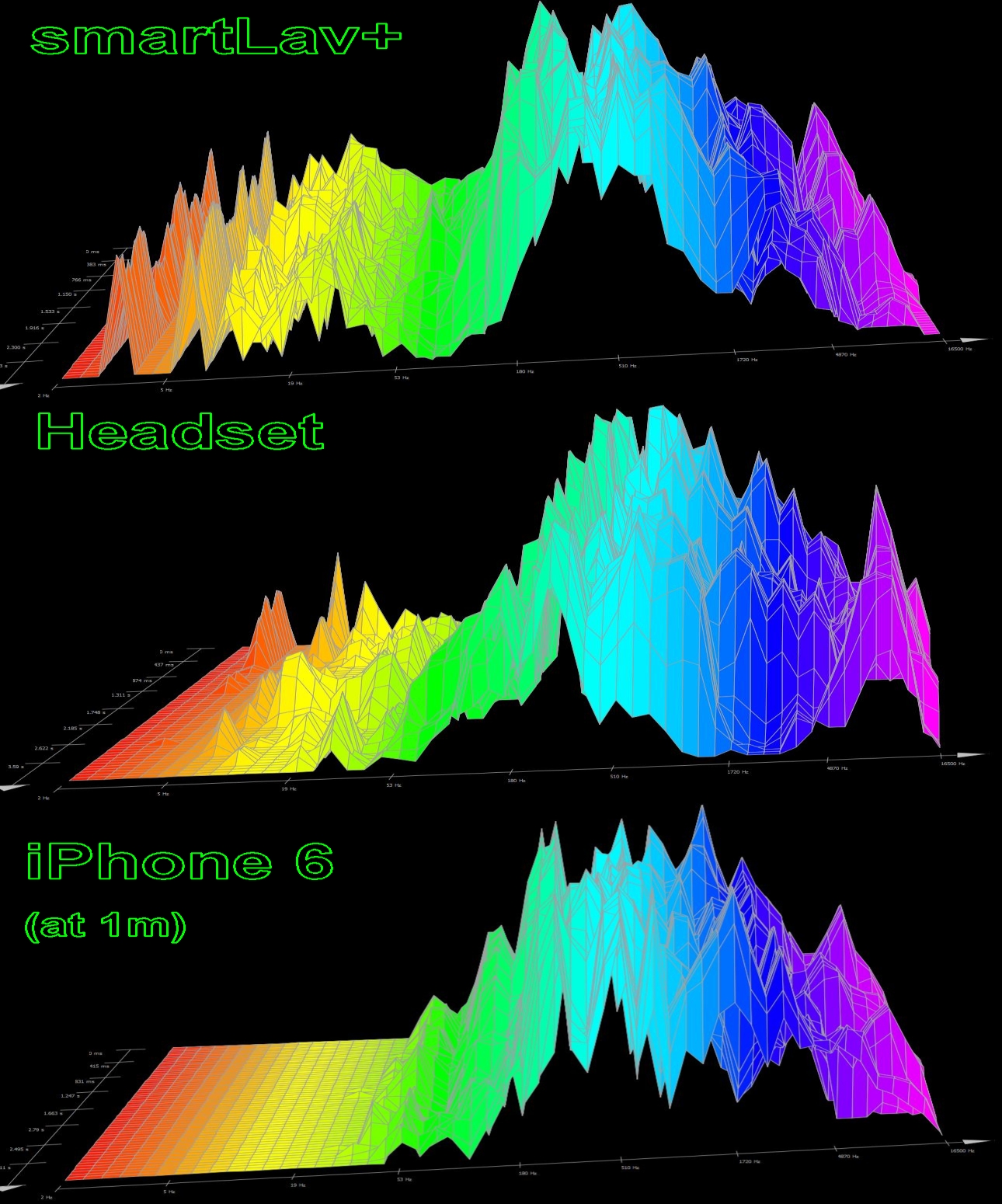 The learnings about Audio for Mojo?