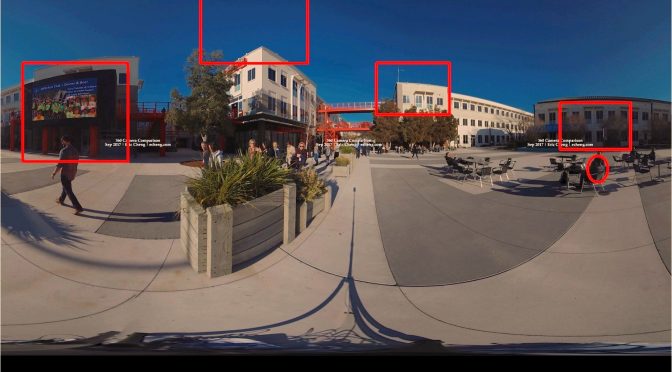 Which one is the best 360 camera – and yet affordable for journalists? That is not easy to tell, if you just see some footage on YouTube. The head of Immersive Media at Facebook, Eric Cheng, published a 360° video comparison of 11 VR cameras he had recorded in multiple sessions on the Facebook campus. You can spot him on most of his footage (marked with the red circle). His selection is including Z CAM S1, Garmin VIRB 360, Insta360 ONE, Xiaomi MiJia Sphere, Samsung Gear 360 (2017) and the older, yet still available 2015 model of the Samsung Gear 360. He also attached some other models, which I will leave out.

So, which is the best 360 camera? I had a closer look at some of the crucial hotspots (marked red in the above picture)  in his material and analysed it further. That photo is a full view in rectangular of the full 360 frame, which you normally see folded in a globe view. Here are my findings on the 360 cameras,…

… very limited and subjective, just based on his video. You can find more technical information about the footage and download his video here: https://vimeo.com/233439051

it’s 4 lenses in the overall quality (the rest of the pack only got 2 lenses).

It should be, as it is far more expensive than the others (around 2,500 Euro). It can

even though, it shows a little rolling on the big monitor, which is probably caused by

different frequencies.  Not a big deal, but is not nice.

The dark parts of the Z cam S1 footage is not of the best quality in the competition, but I guess in this case, Eric Chang just got

a little over the edge in making them darker and more shiny.

If you want to have a real black, the pictures resemble sharper.

The new Garmin VIRB 360 sells for about 750 Euros and has a waterproof housing, which separates it from the rest. It delivers 5,7K  video

resolution and should be ahead of the rest coming. The build-in stabilizer could be a super feature, but in this case all cameras are mounted on a tripod.

The extracts from the footage shows a

strong rolling on the monitor, not the best, but decent frame of the house front in the shadow and the house with the flag is clear, but blurry. And there is a murmur in the sky.

The Insta360 One got all the VR journalists mad, before it

came out in August 2017, because the company launched some cool pictures everybody was wondering how

the were made. It is still cool, but if we come down to the bare quality of the shots in this comparison the One shows some problems with the sharpness at the

house with the flag (probably a stiching issue), a strong rolling on the monitor screen and a blurry and noisy blue in the sky. Not the best performance here. Yet the low light at the house front is decent, but a little noisy.

Samsung came 2017 with a successor 360 camera of the 2015 best selling model. The video resolution is fairly higher, but the

photo resolution is not.  Cost: around 280 Euros.

The footage shows not rolling on the

the right. The roof with the flag and the red bridge is very clear and the blue in the sky is smooth but with a slight noise. The overall quality is decent but the exposure seems to be constantly pumping.

The older model is just a little bigger but has a changeable battery inside and has an distinctive round shape like an eyeball. It is still on the market for down to 110 Euros.

The house with the flag is sharp but a little overexposed, but you can not

directly link it to the later recording of the 2017 model, as it was recorded on a different day. There is a little rolling on the monitor screen and a very decent house front in low light. It

makes the best overall impression of the blue sky on this camera troughout the whole 360 picture.

The Xiaomi MiJia Sphere also has an image stabilization, which doesn’t help in this comparison. Like the Samsung 2015 model the resolution is just under 4K. It is on the market for about

The picture quality in some parts looks pretty nice and sharp, but in some other parts it

show unsharp edges. You can spot it at the house with the flag and the red bridge (even though it was much closer to) and at the low light

house front in the shadow. There is just a little rolling on the screen monitor. The sky looks to me oversaturated and there is some white noise in the blue.

And I noticed a special issue at the

stich-line to the left: Obviously there it cannot handle moving objects that close, like the people passing by.

Eric Cheng does not tell in his blogpost, how he recorded and post-processed the footage (hopefully he will do so) and so the comparison is far from being scientific. But it can give a first insight on the different qualities.

The Samsung 2017 is in my eyes at some point inferior to the older 2015 model, even though it has other qualities like live streaming.  The 2015 model is on the winner side. I think the sharpness is still up to date and the overall image is ok. There is even headroom for sharpening and making the picture a little more shiny.

The Garmin is up to the same level, but with some downsides like the murmur in the sky. Even though it might be a good choice for action reporting. The Insta360 One is certainly very cool with its new features, but the overall picture quality is not top notch in Erics comparison. The Xiaomi shows some sharp and well lit images, but I disliked the stiching problem and the unsharpness at the house with the flag. And the Z cam is surprisingly not ahead of the contest.

Disclaimer: *** Please bear in mind, that this comparison video and my analysis is just a subjective snapshot and not based on scientific data. *** Also the footage was not shot under comparable laboratory criteria and has been altered after uploading to Vimeo. ***

One more frame from the footage shows how close the quality of the older 2015 Samsung Gear360 was compared to the Z cam S1: Look closely at the wooden frame and plants in this frame.

Maybe you like to have a look at my idea, how to stabilize a simple monopod for 360 recording (German):